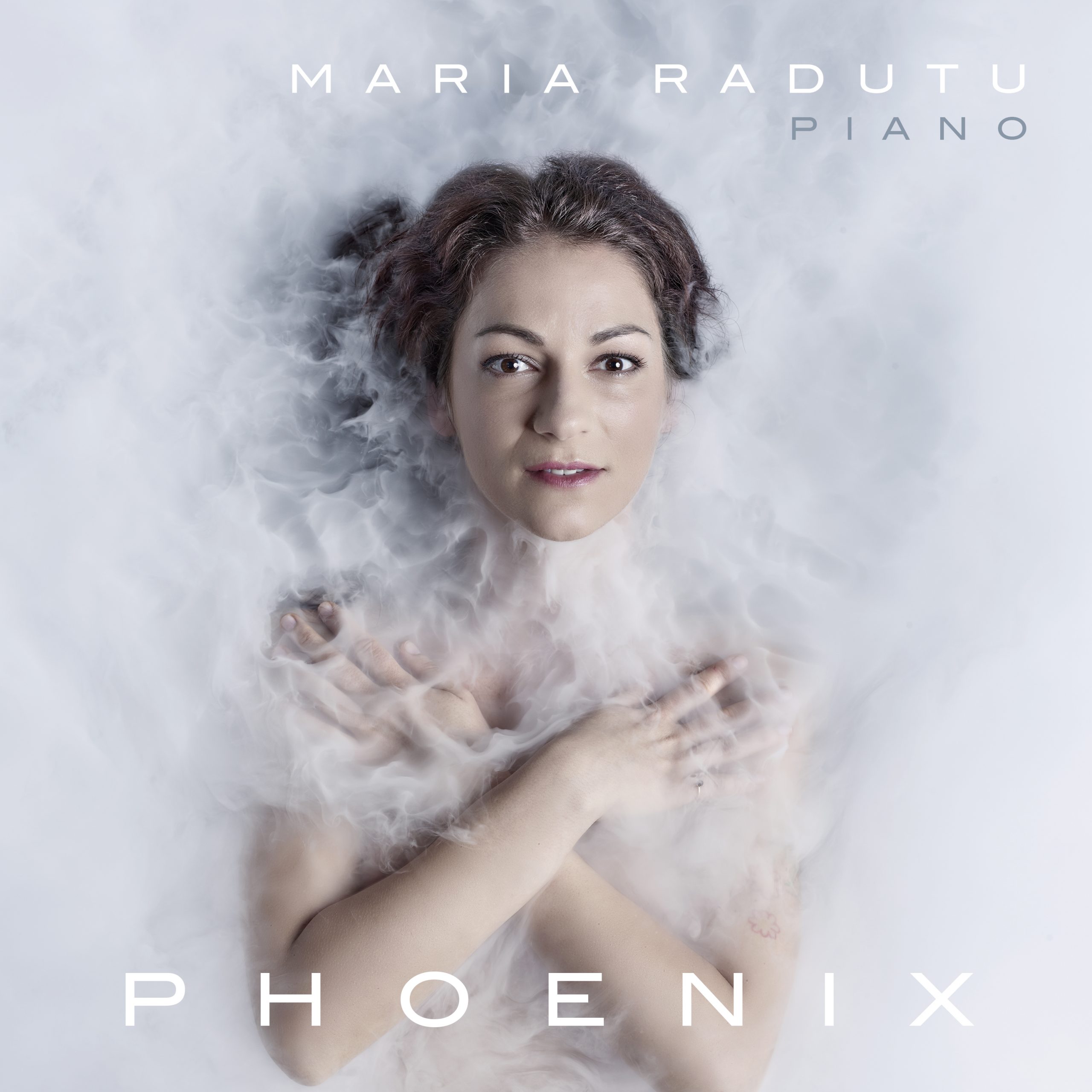 Maria Radutu’s new piano solo album Phoenix is her answer to the question: how do you create a musical rebirth? We travel the path from the volatile youth, accelerating into a storm of flaming destruction, leading the way to a new world of musical styles and the sovereign maturity that illuminates different perspectives and opens up new experiences. A journey of cheerfulness and melancholy, obsession and balance and the inner richness of perceiving all these emotions in one evening.

PHOENIX is the transformation of the young, passionate and unrestrained soul, through outburst and loss, towards maturity and sovereignty – my answer to the question of how to create a musical rebirth. (Maria Radutu)

The beginning is built on works that focus on a solitary, strong emotion, with themes from romantic, folk and world music. Like our young soul, we dive into every single piece so deeply that we become engulfed by it’s feeling until we can no longer think of anything else.

Then comes Mephisto, who inevitably lets all these extreme emotions culminate and perish in a storm of flaming destruction – Liszt’s hallucinating waltz of which “only ash remains” forms the climax and turning point of the album.

Gluck’s melody from Orpheus and Eurydice is the moment when Orpheus steps towards Elysium, walking among the blessed spirits who have accepted the loss of their past lives. Only then can something new emerge: the space for a fusion of styles, a new world of musical expression in which old beauty melts into a modern musical surrounding.

PHOENIX is not about what’s best between old and new, cheerfulness and sadness, obsession and balance, rather it is about the inner richness of perceiving all these emotional worlds in one evening.

With its excited and wild spirit, the Prelude reminds us of youthful revolt, the desire to leave our roots behind, the way we burn for a belief, full of idealism and without regard to losses. As an overture to the album, it stands for the force of a feeling so strong that it makes us forget everything else.

The Gnossienne touches the core of our feelings with only a few notes and a lot of melancholy. Space and time are no longer relevant, and so we sink into the soundscape of a composer whose sense for music was ahead of his time. The left hand reminds us of an accompaniment from Chopin's works, the right hand prepares us for the harmonic world of Bartok.

Like a ritual around a campfire, the Allegro Barbaro awakens the strength that we draw from community. The barbarian spirit in the piece does not hide any destructive intentions, yet the rhythm sweeps us away and we feel that as a group, we can change the world - just like on the first holiday with friends in the mountains.

With Bartok’s close-to-folk music in our ears, we take a new look at nature. Inspired by the sound of the traditional long-necked lute Saz and the Turkish national poem Kara Toprak, Say tells us that we cannot rely on people, but only on the black earth.

Ninni is the lullaby to caress a loved one into eternal sleep. The work of contemporary Austrian composer Marco Annau proves that the musical styles are finally free from the borders of nations. Ninni speaks a universal language, reduced to the maximum.

A tango full of joie de vivre, with modern harmonies, humor and charm stands for the exuberant mood of an evening of dance. After emigrating to the United States, Stravinsky was not young, but he needed the money and wrote a number of works that were fashionable. Nevertheless, he remained true to his world of sound. This creates a charming, dark-sounding tango.

The love story of this album tells the tale of a couple forbidden from existing in daylight, a tale of passion accompanied by the sound of the waves. Through strength and anger, the woman of our story frees herself from the sweet sorrow. The beginning of the piece returns as the memory of her love, which can never be taken away.

Every emotion in which we have been immersed so far stands alone in each piece and engulfs our thoughts. The outbreak of all individual emotions culminates in an exuberant Whole and ends in burnout - here in a devilish, risky and mad dance that leaves only ashes behind.

What comes after the fire? What can we grow anew on the seemingly burned floor? Orpheus reaches Elysium, the land of the blessed spirits, and forgets his grief. For me, this piece from Gluck's opera is the moment when we accept the past losses before something new can emerge.

Crossing Lines is the musical rebirth for this album and is brought to life by the pauses, the hesitant first steps on a path yet unwalked. The composer experiments with African rhythms as a symbol of our human and musical roots.

As the first composer to combine concert symphonic with jazz, Gershwin created a new musical language that is independent and unrestrained from stylistic boundaries. These three preludes prove that serious music can also be merry, with a fresh and positive view of the future.

Sovereign is based on the finale from the ballet "Blanc" by Daniel Proietto, with music by Mikael Karlsson and Frédéric Chopin, whose solo piano part I was honored to premiere. The finale of this album grew from this encounter. Karlsson relies on old beauty in a modern, musical environment like no other - Sovereign is virtuoso and still full of calm, like the flight of the Phoenix.

It’s a sensational mix of pieces on her new solo release called Phoenix. You’ve got music from Chopin, Bartok, some dreamy Satie, there is some devine Stravinsky and right there you were hearing a bit of a ramble on a traditional Turkish folk song called Kara Toprak. It’s a really beautiful album of solo piano. If that is your cup of tea, I think you’ll like all the different vibes, folk music vibes, impressionist French vibes and this little bit of jazz on there too.